Rules of the race

21,5 km cycling race
Start from Monêtier les Bains at 10.30pm (Halte de Pré Chabert next to the Grands Bains) and arrival on summit of Galibier pass at 2 642 meters. 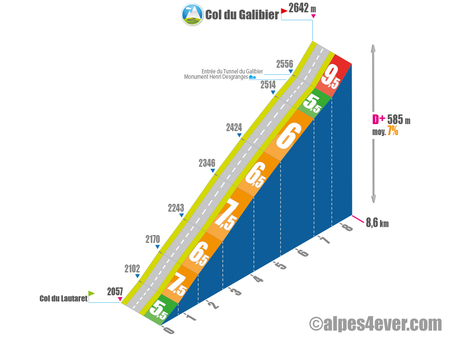 Start
Start at 10.30am from Les Grands Bains (hot baths) parking place in Monêtier (follow the road signs). A buffet will be available on arrival, on summit.

Insurance
The organization has in its possession "civil liability" for the duration of the race. Competitors participate in the competition under their own responsibility in case of accident or subsequent failure due to their health..

Logistic
Competitors can leave a bag of clothes into one of the minibus parked near the starting line. The bag will be brought to the top of the pass. Rank & podiums
The top 5 men and top 5 women will be rewarded (trophies and awards) as well as the 3 first of different categories.